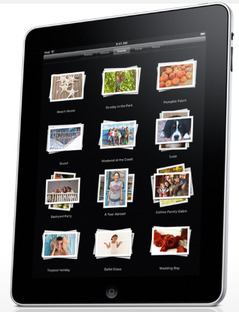 I don’t know whether the name endears it to women or just makes them think that they didn’t get asked to the marketing team’s focus groups, but it has certainly made it get some female attention, outside the crowd of Apple fangirls.

Why do I think this is going to be a good women’s gadget? Let me give five reasons:

1. This is a sexy gadget. We were a bit non-plussed by the photos, I mean, we’ve seen that design somewhere before (ie on the iPhone, the iPod..) but it is a nice one and feedback from the hands-on confirm that this is a pleasure to hold and use. “Leo Laporte just said that it’s an incredible device when you actually get your hands on it… beautiful, light, incredibly responsive screen.” reports someone on FriendFeed. It’s not just women who like a bit of intuitive tactility, but women do like it.

2. Focus on Books not Gaming: I hold my hands up here, I’m sure many women game more than they read novels, but *in general* lets say more women read books than men, and fewer women play games than men. You can game on the iPad sure, but with a 1ghz chip it’s not going to be a rollercoaster ride. You’d stick to a more powerful computer or console for the big games. The iBook store is a big part of the iPad and magazines and newspapers are doing deals to have iPad-friendly editions loaded onto the device.

3. The iPad won’t fit in your pocket – but it will fit in your handbag. Until men fully adopt the concept of manbags, they’re going to find carrying the iPad around to be a bit of a hassle. For the average woman, it can just replace the 2 books and 1 magazine that they usually carry around, all the time. Interviewed on CrunchTV last night, MG Siegler said the first accessory he wanted for his iPad was iPants (pants in the American sense ie trousers). Until someone invents trousers with an iPad pocket (yes they’ll look dodgy) men are going to find this less easy to carry around.

4.This has a lot of lifestyle gadgets on board: the calendar looks great. That’s the sort of thing that’s going to be pretty helpful and intuitive to use. This means I won’t have to lug a diary across town every morning.

5. Apps, this is going to be an app-centric device. Speaking generally I think women really apps, they like to be able to customise devices – the software as much as the case. I think that’s what has made the iPhone a big hit among women and the iPad will have the same impact.