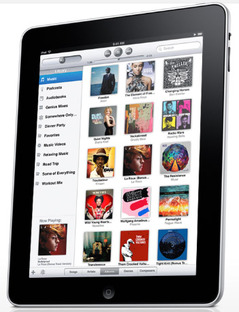 Launched to hype, applause, and a breathless audience Apple’s iPad has been eagerly awaited. Some don’t like the name, others were expecting more of a wow factor but we still got a pretty interesting product. Steve Jobs described the iPad as “magical and revolutionary” and placed it between MacBooks and iPhones in functionality, adding that it marked a cross roads between technology and the liberal arts. Here 10 things you should know about the iPad:

1. It’s like a big iPod Touch: same apps, same frame, same sort of touchscreen (capacitive & multitouch, not OLED) it’s all just a bit bigger, 960mm by 640 as we understand. Oh you can customise the backdrop though.

2. The iPad will have 3G internet, provided in America by AT&T the same providers Apple used for iPhone. You can’t phone anyone, it’s not a phone.

3. Apps will sync: All iPhone and iPod apps will work straight-off on the iPad – they don’t need to be rebuilt. You will be able to sync your iPod or iPhone with the device so you don’t need to download everything twice or reinput your calendar details.

5. It’s got iWork onboard – giving you functionality like document editing: making the iPad more of a computer than a smartphone.

7. Good eReader: The iPad will work well as an e-reader with an off-white background, nice page turning gestures and an online book store, iBooks part of iTunes. The book they demo-ed cost $14.99 (about £9.30). Little pricey? Maybe. They’ve also got a deal with the New York Times: the NYT made a news app specially for iPad. See our article on the iPad’s media partners.

8. It’s got no camera and can’t support flash, though does show videos in High Quality

9. Keyboard available as accessory: You can buy accessories like a keyboard + dock which lets you input text, though also bumping the price up. The iPad does have a touchscreen keypad, like the iPhone’s.

10. Apple made their own custom chip to run this off: it’s1ghz.

Available to buy now on Apple.com, wifi models will be shipping in March and 3G models in April http://www.apple.com/ipad/