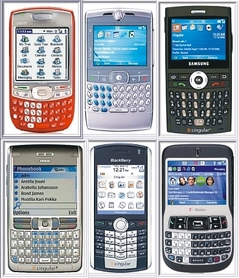 Half of the population will be using their phones for more than texting and talking in 2010, suggest findings from mobile internet survey group Mediacells. They reckon 53% of us will be using apps, consuming media or doing other complicated stuff on our phones.

Basically that means over half of us will be using smartphones.

Since smartphones are getting so important Mediacells suggests that we start to redefine this all-important technology to reflect what the consumer can do with it instead of a list of technical specifications. We see their point: this tech is so integral that it is important people understand it and what they can do with it.

And as proud as geeks may be of detailed lists of Operating Systems and whether the touch screen is capacitive or not – what is most important to the average gal/guy on the street is an understanding of what those things ennable you to do.

So while Ms X wouldn’t buy a handset for its OS, but she would because she can read the newspaper on it, update Facebook and send pictures straight to Twitter.

The traditional definition of a smartphone is: “a device that runs complete operating system software”

There you go – it’s not the catchiest slogan ever (“get an iPhone and foster your non-voice habits!”) but goes a little way to considering tech from a user’s point of view. And seeing as these are the guys with the cash, that’s not a bad idea.