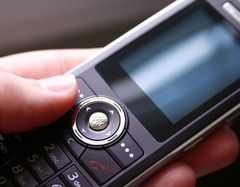 Over 50% of customers in shops at Xmas 09 used their mobile in store to check up on the products they were buying. Customers would use their phone to compare prices, call up online coupons or check online reviews before making a purchase, according to a survey across 11 countries by Motorola.

The actual percentage of people whipping out their mobile to while in store was 51% so only just a majority but still a whopping number, and shows clearly that shops need to take mobile computing into consideration in their retail policies.

Other findings of the survey were:
1. Mobile-enhanced shopping exploded in the holiday season of 09.

4. More sales were abandoned than in 08, but could have been salvaged with compromises on pricing: “nearly 40% of surveyed shoppers abandoned the purchase altogether – a significant increase over 2008 when 20% reported not buying the item at all. Interestingly, the majority of abandoned purchases could have been recovered, including 54% of abandoned purchases in consumer electronics retailers.. if coupons or discounts were more readily available.”

Several apps for Android and iPhone among others offer discount coupons available on mobile phones. Other promotions involve discount codes sent out by text message.