Wouldn’t it be nice if you could draw some conclusion about humanity or the internet from the top five most watched videos on Youtube this year? Well it would be, but I’ve tried for 30 minutes and I really can’t, except something along the lines of: people like music and surprises. 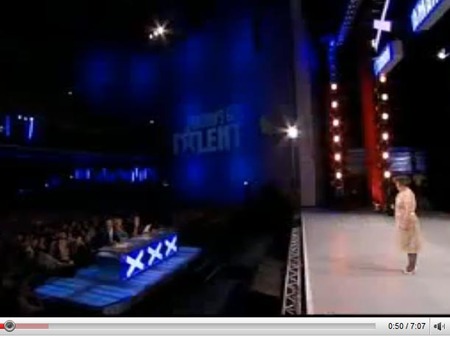 YouTube’s top Five Most Watched Videos of 2009 were varied: two involved kids being weird/cute, two involved music: Susan Boyle and a dance down the aisle to Chris Brown’s Forever at a Minnesotan wedding and one involved vampires.

They all feature surprises of some sort: SuBo’s beautiful voice takes everybody aback in the Britain’s Got Talent show, seeing a kid on some anaesthetics trip is sort of odd, the Wedding dance is great, and features guests dancing down a church aisle for 5 minutes, watching babies slide about in roller skates is cute-surprising. As for the New Moon trailer, well that’s quite predictable actually, but quite hot.

I guess we Brits should be proud that SuBo on Britain’s Got Talent is the most watched clip in the world. The SuBo clip is just over 3 times more popular than its closest competitor. Wow. Three of the clips are professionally made, two aren’t.

Youtube also compiled a list of most watched music videos as well. And with Pitbull “I Know You Want Me” getting 82+ million views, it’s obviously up there as one of the most watched clips on the Youtube.

Music’s dominance on Youtube is noticeable in the month-by-month fastest-rising searches too. Six of the twelve fastest-rising monthly searches were music-related: susan boyle, bad romance, the climb or kanye west.