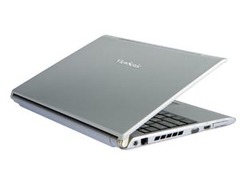 Targeted at users on-the-move, the ViewBooks are thin and light but aim to be powerful, all-purpose computers. More unusually at the portable computer end of the market, the 12.1″, 13.3″ and 14″ ViewBooks and the 13.3″ ViewBook Pro run Windows 7. (Many cheaper netbooks operate on XP).

The flagship ViewBook Pro(13.3 inch screen) is available in black or silver. As the company claim… it “takes the ultra slim notebook experience to the next level”. With a slim chassis forged from high-tech magnesium alloy, the notebook is 1.7cm thick and weighs only 1.6kg.

That’s thin and light compared to say, a 13″ MacBook Pro which is 2.41 cm thick and weighs 2.04 kg, despite having a slightly smaller screen. Though it’s still 0.7cm thicker than the thinnest notebook on the market, Dell’s freakishly skinny Adamo, at 0.99cm.

As for the rest of the range: the tiny ViewBook 120 with its 12.1″ screen packs Windows 7 and a dual core chip, and is pretty impressive for something that size. The 120 is available in black and white. It’s slightly more expensive than other netbooks that run on slower Atom processors but is reasonable and below the £500 mark at £469. 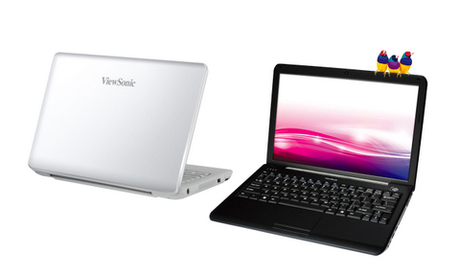