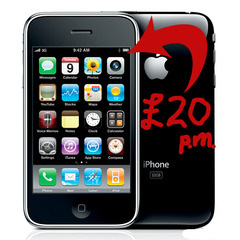 Slashing £15 off the rates of competitors Orange and O2, Tescos is offering the latest iPhone, the 3Gs, for a stunning £20 a month bringing the top smartphone of the decade into a price range that many more people can afford.

Excluding the favourite numbers deal that would mean £60 of credit would get you either 300 minutes or 600 texts. More realistically… that would pan out as something like 200 minutes and 200 texts per month. After the limit is reached calls and texts would be charged at the pay as you go rate.

Shifting the weight of the cost to the initial down payment could be a good move around Christmas time as it means people are more likely to get friends or family iPhones as gifts – knowing the recipient can afford the monthly bill.
Tesco is definitely offering fewer phone minutes than the pay plans of competitors – but it is £15 a month less than either O2 on Orange and that significantly undercuts both of them.