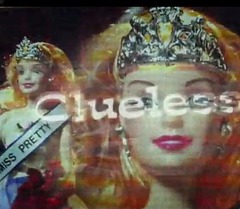 Android are getting dirty with their new TV advert for their phone operating system, and we don’t like it very much. Instead of say, advocating the Android app store, the new ‘Droid Does’ advert decided to lay into the market-leading iPhone by characterising it as a silly bimbo.

The ad doesn’t explicitly say “the iPhone” but it’s fairly obvious that’s what it is aiming at. Unlike this other stupid phone, they tell us, the Android is “not a princess, it’s a robot.. A phone that trades hair-do for can-do”.

So since when have iPhones had hairdos guys? Never? Yes “never” would be the correct answer.

Basically they’re characterising the iPhone as stupid and girly.

This is the equivalent of when boys in the playground go “uuuh you’re so girly you don’t kick walls/mush chewing gum into your own hair/put your head in the bin [insert other mindless activity here].”

I hope this slightly retarded advertising tactic backfires on Android’s ass. It’s not going to win them many favours with a female audience that’s for sure.

And returning to the key thrust of the campaign, is the Android really that much faster than iPhone? Um, it’s not been a major factor in the Android phones I’ve looked at. As Mashable say, I guess Android has to do something about the iPhone. But after this ad, Android are also going to have to some about the 50% of electronics consumers that are women, if it wants to claw any goodwill back there.