A new concept auction site takes online fashion sales to a different place: pay-to-bid site DesignerAuction.co.uk offers high-end fashion pieces at 10% discounts with the opportunity for 90% discounts on each item if won at auction.

But there’s already a big auction site: eBay. Why is this different?
Well, Designer Auction differentiates itself from other auction sites like eBay, by dedicating itself to high-end pieces, straight from designers’ collections from this season, with authenticity guaranteed. eBay has more of the garage sale ethos, some gems, some bum deals. Some weird shit. Significantly, you have to pay to place a bid on Designer Auction, putting it in

But there are lots of fashion sites already? ASOS, figleaves…
This one specialises in designer one-off pieces and luxury items from across sections. MacBooks! they have MacBooks as well as Burberry and Prada. This isn’t a place for white t-shirts, it’s where you’d go for one-off pieces.

What’s this 90% discount thing you mentioned?
Well, this is where Designer Auction adds a touch of gambling and auction-house frenzy to this site. could become an addictive shopping experience.

Yes OMG. Basically one of each luxury item is given away for auction. Auctions start at nothing, each bid increases the cost price by 1p, and extends the auction deadline by 1 minute. The maximum bid is at capped at 10% of the normal selling price. Of course only one person can win it, and many people may have put bids down. 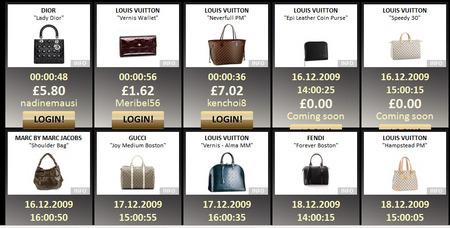 Is there a catch?
Yes. Bids cost you £1. You have to buy bids before you can, well bid on an auction piece. However, you don’t entirely lose the money you put down on bids, because you can redeem it as credit against other purchases you make on the site.

LIke other pay-to-bid sites, it’s possible for people to lose a lot of money through the addictive bidding process without gaining anything. That is slightly off-set by being able to use spent bids as credit against other purchases on the site. But the risk remains. Something to bear in mind when tempted by the deals supposedly on offer.