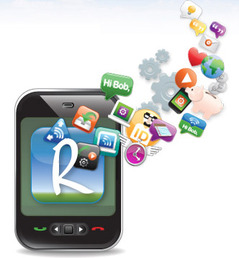 A silicon valley company have set up a mobile phone network – it’s smart, user-friendly and it aims to change what we expect from phone networks – forever. Yes, Forever.

In the rapidly morphing world of telecomm it’s sometimes hard to categorise the new products that crop up. Ribbit is one of those services.

Part internet provider, part mobile phone network provider, a bit like an open-source Skype… it describes itself as an open platform for voice innovation. Ribbit connects up devices to the internet, any internet-ennabled device, not just one of your phones, as in the current system. Ribbit has an “ecosystem” of developers who can use Ribbit to tailor their platform to the specific needs of individuals.

This is the gap they are trying to fill:

“Phones and computers are merging into a new class of hybrid communication tools and it’s happening very quickly. It’s already getting difficult to tell one from the other. In the near future, customers will expect to be able to get all their communication media from a single source, on a single device, over a single network, regardless of where they are or what they are doing.”

So for example, with Ribbit you can build voice tech into your website, or maybe control your website by talking into your phone. 360 degree to the extent that it gets slightly dizzying. There will clearly some significant business applications of which they have given a selection here.

Ribbit also offers improved performance for the average consumer – it turns your voicemail into text, it lets you choose what number you ring out from and lets you receive phone calls to any device with sound and an internet connection. It also saves you money when you’re travelling, as you can route your calls through Ribbit Mobile giving you local instead of international rates and letting you read your messages as email.

You can keep and store messages for ever and get updates on what your contacts have been doing across different media. For example… you could see the facebook status of a friend before you called them.

Pricing plans start from a basic package available for free going up to one at $30 a month, UK ones available soon.

But no Ribbit is not exactly the snappy little minnow taking on the big guys – it has just been bought out by BT. But this means we might be hearing and seeing a lot of them.

Join up to the beta version here and read more about the Ribbit products here.
We’ll post a quick review when we get a bit deeper into it.