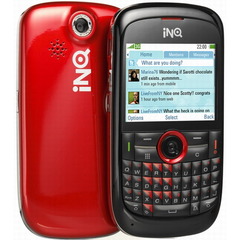 So what do you know about INQ? Well they are based in the UK, work mainly with Three Mobile and are building up a selection of mobiles that work seamlessly with internet apps. This handset’s predecessor the INQ1 was billed as the Facebook phone, this model is designed to work well with Twitter and there’s a phone coming next year that will make the most out of Spotify. I am waiting for the Posterous and the Farmville phones – surely they are just round the corner?

Anyway back to the INQ Mini 3G which is one of the most important Three phones this winter. It keeps many of the features of the INQ1 (more on that later) but has a different design (it loses the slider) and is a little more compact though a bit fatter.

Basically the INQ Mini 3G is all about offering social networking sites like Facebook and Twitter on a budget. The phone retails for around £60 on pay as you go and can be snapped up for free with an £15 a month contract (it has just dropped in price to £40 and £10 apparently).

The phone is a bit old school chocolate bar style and has the look and feel of a Sony Ericsson model from a couple of years back. I have read some reviews which criticise the phone for being a bit plasticky, but I kind of like the design and the red shiny back. Overall dimensions are a very compact 103 x 45.8 x 12.8mm. The keypad sports buttons which are solid and stiff so you need to give them a shove to get them to work. Overall though the phone isn’t bad for inputting text which, if it is to match its billing as a Twitter mobile, it needs to be. As for the screen it is 2.2-inches and is capable of displaying 240×320 pixels

It is the phone’s access to Facebook and Twitter where the Mini 3G really scores. Flick the phone on and you get a home screen (which you can customise – I have the weather and the BBC news running off mine) with a series of icons at the bottom. You just use the circular button below the screen or the button on the side to move between the apps. If that sounds complex then there’s a menu button which instantly takes you to a colourful and pleasant looking screen which is filled with icons from the various apps.

The key ones are of course Skype – you get free phone calls to other Skype users – Messenger, email and of course Facebook and Twitter. It was very easy to set Facebook up and the the ability to upload to Facebook each time you take picture and the integration of your Facebook friends into the contacts are very useful. As for Twitter the client is basic – it sure isn’t Tweetie, but it is simple to use. You can swiftly move through your latest set for tweets and adding a tweet is very easy. However if you want to retweet, search tweets or try anything a bit more complex then this isn’t for you.

All the other features you’d expect are on board, so you get an MP3 music player, (though not the Last FM connection of its predecessor), an ok web browser and basics like calendar and alarm. Should also add that it comes with a single USB cable so you can use it to connect to your PC or to power from the mains – if only all phones were like this…

Well there has to be a few reasons why the phone is so cheap/competitively priced. The main one is the camera which quite frankly is pretty useless. It takes two mega pixel images, takes an age to get snapping and is very poor in anything other an optimum lighting conditions. What makes this rather baffling is that the INQ 1 has an ok 3.2 mega pixel camera – curious.

The big omission though is not a QWERTY keypad – we can live without that – but rather a 3.5mm earphone jack. I don’t know why this isn’t standard on mobiles now and if INQ thinks it can sell a Spotify phone without one it can think again.

Just 50MB of storage also sounds pretty poor, though you can of course upgrade this via a microSD card.

As I mentioned a few people will find the styling a bit tacky and I guess given its billing as a Twitter phone the lack of functionality there might rankle some users.

Finally a word about battery life. It wasn’t too bad and as long as you don’t spend too much time online it should see you through more than one day. The problem for INQ though is that many similarly priced and sized rival handsets will double that.

Well this is social networking on a budget and if that’s what you want then the Mini 3G is a real contender. If you want to keep in touch and take advantage of the cheap deal and the Skype free calls then the Mini 3G has much to recommend it.