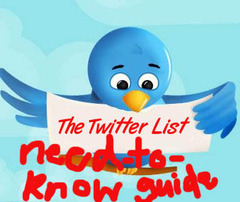 Twitter lists – has the word “lists” ever been said so often in so few hours? It seems hardly likely. A quick Shiny guide to everything you need to know about Twittter Lists.

Twitter lists eh? Setting those up is going to take hours isn’t it? Should I be that bothered?

Yes you should be bothered. This is Twitter’s biggest update since the damn site launched and it should make the whole experience a lot better. A whole lot better.

You may have noticed that there’s a lot of stuff going on Twitter and even the site’s biggest fans will admit that not all tweets are useful. And even if lots of them are useful, sometimes they get lost in the rapid fast-flowing torrent that you get if you follow more than 50 people. So, the Twitter reasoning goes, split the stream up into useful little lists and it all gets more manageable.

Of course if the respected technology journalist you put on your Technology Journalist list tweets about their lunch, you will still hear what they had for lunch, but you won’t see Stephen Fry’s lunch updates mixed in there. He’ll be on your Celebs list. You see. So: Twitter lists won’t make Twitter the perfect source for targeted up to date information but they will make it a better place.

In theory your Twitter feed could already be a carefully selected list, but in practise with so many interesting people – why the hell would you limit yourself to following 20 people. Not the point of Twitter.

So how many lists can I have?
Each account can create up to 20 lists, and each list can include up to 500 users. You can make your list public – in which case other people can use it as a useful resource or make it private, in which case you are less likely to risk upsetting people with your defintions of them.

You can of course group the people you follow in any combination you want and give it any name you want. You don’t even have to follow people to put them on your lists.

The obvious… be a little careful with the public lists. You know, ideally don’t make: “Annoying People I follow only out of sheer politeness” a public list. Even the “funny people” list could get a little contentious as friends and acquaintances start to wonder why you don’t find them funny.

Listiquette questions are already buzzing around the twittersphere:
Is anyone going to be upset if I add them to my twitter list “Things I would sleep on?” from rumorator
Oh. I see. I’m not on your “Funny” Twitter List. No, I’m not hurt. Do I look hurt? Am I holding this gun right? from angryczeck

So it makes the tweet stream easier to manage – any other uses?

Yes!
1. Other people’s lists are great for browsing and finding out new people you are interested in
2. Embed a Twitter list into your website and provide a flow of focussed real-time information into your website. Use the Lists API: the Huffington Post already are.
3. You can keep tabs on a much greater number of people than you could previously handle

How do I go about setting up a list?

If you want to use Twitter lists professionally consider a service like TLists (recommended on Twitter’s blog).

The problem is that most people use Twitter in multiple clients – Tweetdeck or Seesmic say on their computer, and a whole range of different apps on their phones. To date only Seesmic has adopted lists, of course the others will follow, but the full usefulness of lists won’t be felt till you can get them across all the platforms you use Twitter on.

Wait till your Twitter client of preference adopts them: Tweetdeck, according to their blog are masterminding some update to incorporate lists. Surely smartphone twitter apps will follow too. Be sure to check your phone’s app updates.

How do I find good lists?

Look at the lists of the people on your lists (if that doesn’t make your head explode). Or check Listorious a directory of good twitter lists.

Parting tip: remember to take regular breaks and drink plenty of water. Twitter lists make Twitter easier in some ways – they also just pave the way to making Twitter even more vast and complicated than it already is…