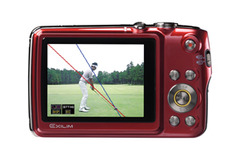 Capturing up to 1000 frames a second, it gathers very detailed information about how you move, then using simple augmented reality graphics it layers lines on top of your image showing how you are and should be moving.

Playback can be super-slow allowing you to see what you couldn’t with the naked eye.
With an AV cable you can plug this into the TV and rewatch your golf swings there. You might get dumped if you do this too often, so think carefully about it.

Top Japanese players and coaches have contributed to the advice and analysis parts of the program, said to be ideal for beginners.

Launched initially in Japan, at a price of 34000 yen, it is expected to become internationally available. Casio press release here – google translate if necessary] [viai4u]