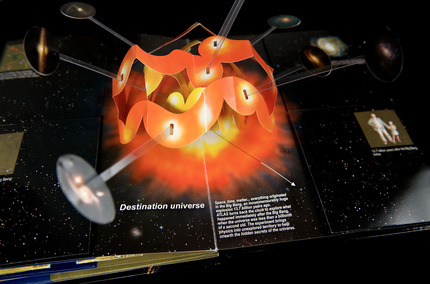 The Science experiment that people feared would end the world, is now available as a coffee-table book, and a damn fine one at that. The Large Hadron Collider at CERN is the world’s largest and most complex scientific experiment but thanks to a British scientist working on the project and Anton Radevsky, a “paper engineer” you can get a glimpse into its workings though a pop-up book.

Surely this is the ultimate geek hardback this Christmas.

The Hadron Collider or LHC aims to recreate for a few millionths of a second some of the conditions that existed after the Big Bang, the event that started the universe. It raised fears of apocalypse back in April when some scientists predicted that that attempting to do so could cause the end of the world. Fortunately, it didn’t.

We imagine some of the complexities of the 7000 tonne machine are left out of the paper pop-out version, though a lot of complex ideas and beautifully detailed paper constructions are included. A great way to understand the biggest science experiment of our time.

The book is available for purchase from end November, for £20
See Atlas for more details