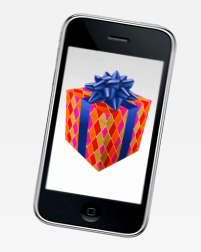 I know several people who would probably slap me if I gave them virtual Christmas presents. It’s not often you can get away with sending someone what is essentially an email attachment as opposed to going out to the shops and coming up with something decent and err, real.

However – one small British start-up is reckoning that people will want to send each other virtual presents. In fact, they’ve based their whole business model on it. Six entrepreneurs in Liverpool have started an iPhone app called “little World Gifts” that lets users buy virtual gifts for each other. The gifts are 3D animated items that can be spun and examined on the screen.

The video below should give you the gist:

People do spend money on virtual goods: Zynga’s Farmville successfully sells users “farm money” in exchange for real money, and Second Life has been hosting real-virtual business exchanges for years, so it’s not a revolutionary idea, but still hard to see whether a virtual present can replace a physical one. I can’t imagine Santa’s little elves tinkering around on Adobe Flash. How will you explain that to the kids?