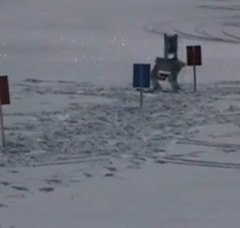 While we’re on robots – meet the… skiing robot. Is there anything these little androids can’t do? Well yes I guess there a few things – love, make moral decisions etc.. but you can sure cross skiing off the list.

In the past few months robotics scientists have made a skiing robot. The mechanical skier can race downhill and even make turns to pass between gates. Described as a laptop on skis, the Skibot has to use the special technique of carving to ski properly.

His first tentative skis down the snowy slopes of what is possibly Slovenia are really cute to watch: look!

I am impressed by the skiing robot, generally though, I thought robots were supposed to do the tedious tasks that humans don’t like doing – dish washing and hovering for example. Evidence suggests that humans do like skiing and that in fact they pay lots of money for the privilege of doing so.

It’s a bit like designing robots to drink cocktails for you, or attend parties and eat chocolate.

However, we understand that the technology involved is pretty impressive: the laptop control center plans the robot’s trajectory, using a camera to measure its distance from the race gates. It stays stable thanks to gyros and force sensors.

The internal GPS unit, is used to help measure speed, not for trajectory planning. That makes sense, if you’re trying to build a robot that works more like a human, relying on vision.

The makers who presented the robot to a conference in Slovenia suggest uses that include: testing ski equipment and modeling of skiing for VR applications.

We think the sheer Aw Cool! factor is enough to justify this one.