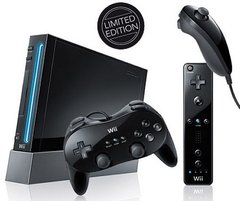 Nintendo will sell a limited number of black Wiis in the UK and Ireland next month, from November 6.

It’s an entirely superficial change, but it may get the Wii fans out lusting for the new colour, especially as the Christmas buying season starts. The black Wii hits mainland Europe two weeks later on November 20.

Wii accessories – the remote, the Wii Motion Plus and the nunchuk – will come in black as well.

It’s cool because it’s different, and the limited number on sale will only add to the recherché appeal.

On a side note: are black gadgets inherently cooler than white gadgets? Any thoughts on this question? I know for example black iPhones sold out before white iPhones in several stores in London, but is there a general rule (??).
Black Wii on nintendo.co.uk