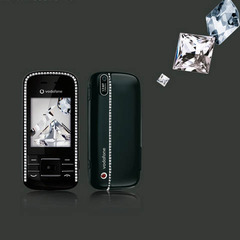 Suddenly it seems as if everybody is sticking expensive jewellery on phones. Sagem wireless – the custom phone creators – have partnered with Swarovski diamonds to make Crystallised phones.

Their flagship product is a Vodafone VF533 to which they have added a trimming of crystals on the front face and a strip up the back.

Sagem have carved out a niche in customising high-end phones and Crystallized are a branch of Swarovski and make loose cut crystals for sticking on various things. With smartphones becoming the desirable high-end products that they are, it makes sense for the top diamond cutters to start getting in on the act and associating jewellry luxury with tech luxury.

The price range for crystallised phones doesn’t seem to be available, but check up the Sagem Wireless website here. We imagine it won’t be cheap.

If you do want cheap, however, head to the other end of the phone bling spectrum and get some peel-off sticky crystals as featured by fonefunshop.co.uk. Selling at 1000 for a mere £13.99 this is a cheaper way to add a little glitter to your device. Yes they aren’t made by Swarovski, but from a distance the effect is sort of similar.

Related: The most expensive iPhone ever? a cool £23k and the Puma football world cup phone