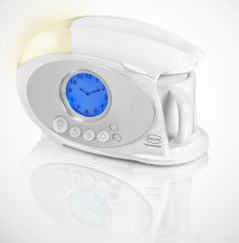 Classic gadget the Teasmade – an icon of the sixties and seventies – has been redesigned, and is now in stock at John Lewis.

Cunningly combining an alarm clock and a kettle, the idea is simple: Teasmade times the kettle to have a cup of tea ready for you by the time the alarm goes off.

First patented back in 1902, it’s an eccentric English gadget of the finest order. The Birmingham gunsmith who applied for the license called it: “An Apparatus Whereby a Cup of Tea or Coffee is Automatically Made” and it was later marketed as “A Clock That Makes Tea!” (!)

It means you can’t throw your alarm across the room without getting boiling water on the floor/cat. But maybe you’ll wake up in a good mood anyway because of the gently wafting tea aromas.

Available in John Lewis stores for £59.95