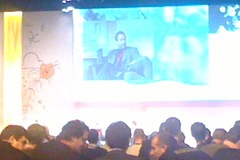 Lights, laptops and technoology greats at
SEE 09 – the conference hosted by Symbian the people who make the operating systems found in Nokia phones. Hosted over the next two days, the Symbian Exchange and Exposition in London is a gadget marketplace, workshop host and stage for some big speakers and big ideas.

Symbian CEO introduces the conference with what they’re offering to consumers, to businesses, to developers. He wants them to have a new dialogue. More conversations. More experiences.

Jimmy Wales, founder of Wikipedia is on at ten giving a talk titled: “Welcome to the new World”. Live-blog after the jump

Live-blog of Jimmy Wales: “Welcome to the New World” at SEE 09

10.15 “I want to talk about community and how we make community”

10.16 JW talking about Television and how it has changed: Jimmy does an impression of his mother asking him to change the configuration of the VCR
“Products that were once very simple are now very complicated… culture is getting smarter.”
Comedy shows for example. Seinfield is more complicated than 50s show I Love Lucy.

10.20 we’re getting smarter too. Through the internet which lets us create and share

10.21 Lost – a really complicated tv show – “almost too complicated to actually watch” almost couldn’t watch it unless you had the technology to support it.
not just playback and pause, also – youtube, clips and Lostpedia – hardcore superfans creating a resource for understanding the program. Valuable for normal fans too

“the ideal encyclopedia should be radical. It should be anything but safe” Charles Doren, 1962.

10.22 Every single person on the planet is given free access to the sum of all human knowledge.

Really excited by the growth of open source in the mobile world. There are a lot of players, we’re not going to end up with a monopoly, it’s going to be a open-ecosystem.

10.29 By and large most Wikipedia articles are in European languages – linguistically diverse but mostly concentrated in Western world.
Hindi, one of the fastest-growing language sections

10.31 For most people in the world – first sight of the internet will be on a mobile device. We want to think about how to get there.

10.35 Graph – showing what type of articles are popular in what countries. in Japan – pop culture. French, Russsian – read lots of articles on geography.
Sex very popular article in all languages except French and Spanish.

10.38 Lots of whiteboards, post-its, files and idealism in the the Wikimedia office. “It’s the standard bearer for free knowledge.”
25 people work there.

10.38 Lots of whiteboards, post-its, files and idealism in the the Wikimedia office. “It’s the standard bearer for free knowledge.”
25 people work there.

10.41 Wikia – new project. If Wikipedia is the world’s encyclopedia, Wikia is the world’s library. Community is a word often abused online – not the ‘general public, it’s people who know each otherand work together’.

10.42 Wikia ranked 78 on the internet. Recent explosion of growth. Much easier to edit, with at WYSIWYG editing interface.

10.45 An apples and oranges comparision but deeper point is: when consumers want info they go to the web to somewhere with deep rich content.

10.50 Influencing super-influencers one of the most important things, in getting pple to make decisions

10.51 Homeless wiki – a community sharing information – how to get things, how to deal with it, where to go.
Created 100s and 100s of articles. For free, a community of people have come together and built this very valuable database.

10.52 Wikiagreen – consumer-focussed site about green issues. Not a neutral site, but again built by a community according to their needs.

10.54 Wikianswers, Music Wiki – with lyrics, the official lyrics, the funny lyrics one band sang at a live show once .Deep knowledge.

10.57 Wikia have just had their first profitable quarter.

10.58 His daughter uses a wiki to get better at the games she plays. Next gen expect to engage deeply with everything they do.

Crowd-sourcing is a misleading and demeaning term – eg. can’t afford x – Nobody works for free – you need to get paid. But not necessarily for money, if there’s not money, it needs to be fun. Let them do what they want to do.

11.02 Distrust makes a bad society. That was the problem with Nupedia. System of accountability rather than gatekeeping.
An important design principle across the board.

Online commumities are just people – you can trust them for the most part. Design around the good people.