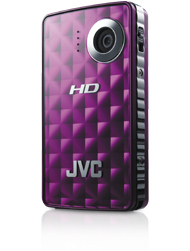 Launching into the pocket camera market, JVC has come out with the Picsio – a small camera which captures still images as 8 mega-pixel Jpegs and shoots High-Definition video.

This pocket cam beats the camera on most phones in terms of quality of images and video; and its size (same as a small cellphone) makes it easier to carry about compared with standard cameras.

Videos are recorded in the widely-used MPEG-4 AVC/H.264 format and stored as .MOV files for easy sharing reducing the need to convert files. Storage comes on SD/SDHC memory cards.

The camera connects to computers with a USB cable and you charge it off the PC as well.

Pocket cams are an interesting new market. With the general trend towards portfolio devices like smartphones which meld multiple gadgets in one, it remains to be seen if there’s a market for a single-purpose gadgetry like the Picsio. But the good looks and handy size should tell in its favour. See the specs on the JVC site here.