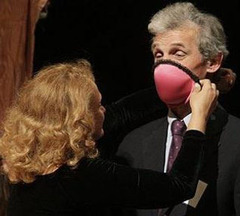 Uber LOLs and an IgNobel prize for this piece of genius technical engineering. A Russian scientist has invented a bra that doubles up as a gas mask. Two gas-masks as a matter of fact -one for you, one for your friend.

Sometimes the human race fills me with delight.

Well it’s quite a serious matter actually. After the Chernobyl nuclear disaster in Russia a lot of cancerous damage was caused by people in the vicinity breathing in deadly Iodine-131. Elena Bodnar, formerly of Ukraine, the new bra’s inventor, says her bra could have stopped people breathing in that dangerous radioisotope.

I suppose as an alternative, gas masks could be put in easily accessible places… but the gas-mask as bra approach means there’ll always be one nearby. Provided women can be persuaded to wear them. Will they come in different colours and cup sizes. We imagine so, though doubt we’ll be seeing them in La Senza anytime soon.

Look – it’s a picture of elderly male scientists with women’s underwear on their faces. 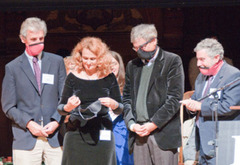 This invention is a gift to the movie industry, because it gives women scientists a reason to tear their tops off as nuclear annihilation approaches, like something straight out of James Bond. Oh man.

Related: Dry your hands (or your bra) on a pair of bewbs