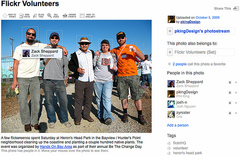 Flickr has just launched a new feature that lets you tag people in the photos you upload to the site. Called “people in photos” it pretty well does what it says on the tin.

Revealed on the Flickr blog yesterday, the feature will allow you to tag other members in your photos, find photos of people you know and manage which photos you’re in.

Though very similar to Facebook picture-tagging, there a few significant differences: mainly giving users more choice over whether they can be tagged.

Unlike Facebook, Flickr lets you set your preferences for who can add you to photos and who can add people to photos you’ve shared.

You, as a Flickr member can also determine on a photo-by-photo basis if you’d like to be featured and if you do “de-tag”, only you will be able to add yourself back in.
You can also disable the People in Pictures for your account, so no-one can tag you ever. People not on Flickr have some control over whether they get tagged too: they need to give their approval to be added.

What do you think? Will this lead to the Facebook-isation of Flickr, where it’s about the egos not the photography? Or will it just help people sort pictures and keep up with their friends?