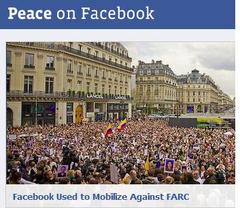 Aside from improving the News Feed and juggling deals with search engines, Facebook is also trying to bring about World Peace. And they have gone about it by setting up a dot peace campaign with a group in Stanford University.

Given that Facebook has more members than any country apart from China and India, it does have a significant reach over the people of the world, but sceptics say it’s going to take more than a few graphs and some wall posts to bring about an end to war.

The page is set up with a Twitter-like comment wall and then graphs showing social connections in trouble areas – it’s peace-making by data sharing. And it is interesting – look:
For example in the past 24 hours, 5,189 friend connections were created between Israelis and Palestinians. Picking up on three other problem zones such as India and Pakistan – Facebook also logs the friendship connections between people of these different nationalities in a line graph.

It is all quite fascinating information, but ReadWriteWeb poured a little cold water over Facebook’s new ambition and its efforts at promoting it. Facebook is sitting on a data gold mine RWW say, and if it really wanted to help promote global understanding and provide decision makers with valuable information for analysis, it could release a bit more information than just that shown on these little graphs.

“When data is opened to analysis, patterns can be discovered – some of them unjust acts of systematic violence. The world is an unjust place and the social activity of 300 million people on Facebook will inevitably be useful in exposing some of those patterns of injustice.”

We await the results of Facebook’s attempts at World Peace with interest. Meanwhile go to peace.facebook and make a comment.