Who doesn’t love comics? Who doesn’t love web comics even more? And websites that help little schoolkids make webcomics while learning about literacy or something must the AW of the week.

Make-your-own-comic site Bitstrips has just launched a webcomics for schools programme – custom-tailored for the classroom. It teaches little kids how to read and write all while designing wicked little avatars.

In an introductory video they all grin and tap the computer screen, then make little characters who look like them, sort of, and then fill in the dialogue, helping them read and write. AW.

Bitstrips has just sold a license to the education authority of Ontario and 15000 kids have signed up in six days. Lucky little sods, wish that this had been around when I was in the classroom. Anyway for those who already know how to read and write and just want a little innocent comic-based web fun Bitstrips is well worth a look.

Because it’s simple enough for kids, it’s pretty intuitive to operate. Look readers we did one for you. It’s called ‘No Title’. By accident. 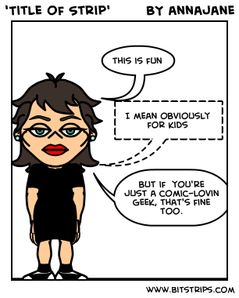