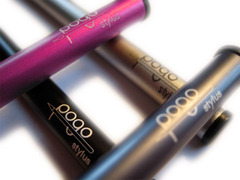 I’m not sure about you, but I find it difficult to sometimes use my iPhone with my girly long nails.

It’s fine when I’m using apps but trying to touch on web links can be a nightmare.
However American based company Ten One Design, has come up with a solution, which saves us from cutting our pesky nails off.

It’s launched the Pogo Stylus and Pogo Sketch, compatible with the iPhone and iPod touch, which are also now available in Hot Pink.

Peter Skinner, Ten One Design CEO said: “We’ve found that the Pogo Stylus and Pogo Sketch have been crucial to the female iPhone and iPod touch community.

“Since women cannot operate the capacitive touch screen using their fingernails, these products have become a much-needed mobile solution. And we’re proud to be able to give our female audience what they want, now in a more stylish color.”

According to the company the advanced material used on the tip of the styli is what makes it so extraordinary and revolutionary for multi-touch displays. It acts as a bridge by transferring the signal from the display to the user’s hand.

Oh, and they’re also perfect for those of us who like to wear gloves in the winter too.