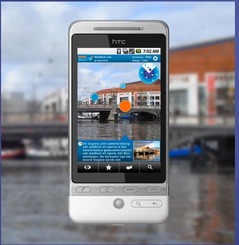 Like everyone else a little bit geeky, the idea of augmented reality gives me spine shivers, in a good way. And it looks like a digitally enhanced reality is getting a little closer as Android phone app Layar became available to phones worldwide this week with a promised arrival in the iPhone app store imminent.

OMG. I’ve already drawn up a wishlist of augmentations I think reality could really do with…

What Layar does
Layar lets you overlay a layer of digital content over external reality as seen through your phone’s camera. Point your phone’s camera at a street/building/person, and on the screen, information about what you’re seeing is overlaid onto your view of it.

With Layar any developer with a bright idea can add their own layer of content. There’s a Wikipedia layer for location-tagged Wikipedia entries, a find-an-available-house layer called Funda set up by an entrepreneurial Irish developer with an interest in property, and a bank has done one marking all nearby ATMs.

Very interesting, but more than just “where’s the nearest available-to-rent semi?”, I want augmented reality to do fun things. Leaving aside current technical limitations, this is what I would like to see on my phone’s screen when I shake it, wave it around and point it at reality.

1. The Drinks prices Layer…
you never know till you get in and you’ve ordered a round how much a pint is. This layer would let you do a quick price comparison – as you shift your phone around a street of pubs, the price of a pint, glass of wine and G&T would flash up. Hopefully it would also be time-sensitive so could include happy hours and special offers.

2. The Curry ingredients layer
If someone would be so kind as to upload details of shops selling curry ingredients, along with opening hours and an inventory of what they sell, you would always know where to get clarified ghee at short notice.

3. The “Here’s How to Get to My House” layer
Arriving in an unknown area, your friend can guide you from the train station to their house/the weird club they’ve decided to hold their birthday party in, via a series of location tagged messages. As you pass a certain point, a little text they left tagged to that spot swims up onto your phone’s screen and gives you a direction. Turn left here Anna. Perhaps they left a voice recording and your phone plays it when you get to the right point. Like a trail see? Of course you’d need to make sure you were following the right trail and didn’t start picking up the wrong messages, otherwise god knows where you’d end up.

4. The “Where did that girl get her shoes from?” layer
I know you can’t really tag clothes yet, and it’s a shame. You’d need to embed all your shoes and t-shirts with microchips, or record online what clothes you were wearing whenever you stepped out of the house. However, wouldn’t it be cool if you could shake your phone at someone with great clothes and just see where the top came from, how much it costs and link up to how you can buy it? Yes it would brilliant. I look forward to someone making that possible.

5. The Party Conversation Layer
At a social gathering of some sort, say a party filled with people you don’t really know – your phone automatically scans the other phones in the room, calling up information about their owners. Perhaps… using oh-i-don’t-know, friendfeed or something, it runs through their spotify playlists, most tweeted words, and your mutual friends on Facebook and works out who you’d be most compatible with. So you don’t waste time talking to people who – like – have completely different Spotify playlists.
Of course this would be freaky and stalkerish, it would also be really cool.