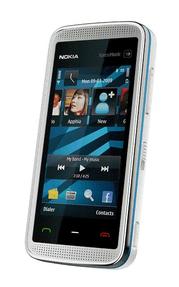 In my job I get to play with a large number of phones, so when I’m reluctant to send one back it generally means I’m particularly impressed with it. Sometimes it’s the interface, sometimes it’s the design or ease of use, and just occasionally a phone has all three. My love affair with the HTC Magic followed on from my infatuation with the impressive Nokia 5800, and news of an updated version has me on red alert.

What you’re looking at here is a slightly more budget model, but with a shinier casing and re-jigged layout. Screen size has been downsized to 2.9 inches from 3.1, but resolution stays at 640×360. You also get less memory – 4GB rather than 8GB, but the camera (3.2) and one size fits all headphone jack (yay 3.5mm) remains the same.

But what really attracts me to the phone shallow as I am, is the style. The 5800 was an amazing piece of kit, but aside from the ultra glossy screen had rather plasticky feel to it, whilst this sleek device mimics the LG Arena, with silver curves and multiple colourways to choose from.

It runs on S60 5th edition, and includes an FM radio, Bluetooth and will last for 27 hours of audio, but though it’s lacking 3G and GPS we’re told it will cost significantly less. The home screen has been re-jigged so it can feature links to websites, and the contact bar scrolling has been improved.

Get it from Autumn at Nokia- price currently undisclosed. [via IT Pro]

Related: Phone Wars : The iPhone vs Nokia 5800 vs G1 Android