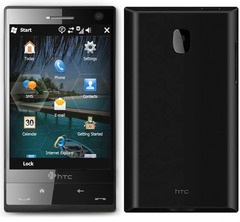 Leaked pictures of the new high-end smartphone from HTC are trickling through the net. Apparently the picture on the left is HTC’s new Firestone, one of the company’s two top-of-the-range touchscreen devices to be released this year.

Firestone will run Windows 6.5 for mobile, an operating system that Microsoft unveiled back in February. Windows 6.5 includes a new app marketplace for Windows mobile users and much greater web and phone integration via the My Phone service.

Since Microsoft is partnered up with LG, HTC and orange, the Firestone will be one of the big players in the Windows-run phone market. Replacing HTC’s Touch Diamond range.

And the Firestone specs, if the leak is accurate, are a bigger and more sensitive screen – a 3.6-inch WVGA touchscreen with graphics powered by a Qualcomm 600 Mhz processor; memory in the form of 256MB of RAM, supplemented by 512MB of ROM and a microSD slot; and one of the major features, a 8megapixel camera, which would be the largest in the HTC range.

Connection options are thought to include GSM and HSDPA, along with Bluetooth 2.0 and 802.11b/g Wi-Fi. Limited navigation functions are supported through assisted GPS, and an accelerometer should enable automatic image rotation. Audio can optionally be pumped through a standard 3.5mm headphone jack.

The price hasn’t been mentioned but sounds like it’s coming out sometime in August so we’ll find out soon.