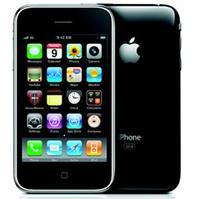 We’ve been waiting ever so long for the iPhone to get of its sleek concave arse and actually do something about its hardware, and last night at WWDC, the world learned of just what had been going on in the Apple hive mind for the last couple of months. We got news of new Macbooks (13, 15 and 17 inch models if you must know) but what kept all the tweens up way past their bedtime, was the news of the latest iPhone to hit the block. It’s entitled the iPhone 3G S (yes, we also think that’s a stupid name), so any lingering hopes of 4G compatibility have been dashed, but that doesn’t mean it’s all over yet.

And what did we get?

Well, we predicted they’d up the camera spec, throw in a flash, improve the battery life for both talktime and 3G and perhaps bring out a model in pink (c’mon, you know that would sell).

Well, we got some of the above, but the changes whilst noticeable aren’t that impressive. The camera has been upped from 2 to 3 megapixels,and they’ve also added in auto focus, a 10cm macro and white balance adjustment. No flash though, which is a major shame, and in the days of 12 megapixels no one is going to be bowled over by the inclusion of one more megapixel. You can tap to focus the image though, and they allow you to take video at 30fps in VGA resolution. OK, no great shakes, but a mild improvement on what already existed.

What’s up next- the all important battery life. This has been dramatically (OK, let’s not get carried away here) improved with 5 hours of full 3G usage, 12 hours 2G talktime, and 10 hours of video playback. Hopefully that will have the fans smiling…

They’ve added in a few unnecessary extra features as well, such as a Voice Over accessory which reads aloud text that you touch, a voice control function for voice dialling and a compass that links to Google maps, so you can follow the north star home.

You can use the new voice function to move between tracks though which might be useful, depending on how seamlessly it works. The phone comes with 7.2Mbps HSDPA, but rather disappointingly 02 have added some ‘rules’ to the tethering service. Tethering means that you can hook your handset to your PC to act as a 3G modem, thus letting you get online easily and saving you the cost of a dongle- but 02 are shaking their finger at anyone who wishes to use the iPhone that way., To tether your phone you’ll have to buy a BOLT ON package 0f £14.68 a month (3GB data), effectively paying TWICE for the privilege of using your 3G network.