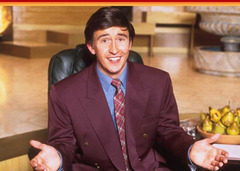 An application based on TV character Alan Partridge has been storming the UK iPhone app charts. As I type, Pocket Alan is The Number 1 paid-for iPhone app in Britain. (Not surprisingly, the current most downloaded paid-for app in the States is not based on Alan Partridge, but is an time-management game called Sally’s Spa.)

We forked out £0.59 and downloaded Pocket Alan to try and work out how its makers had struck iTunes gold with an app based on an obnoxious tv character.

Very simply, is the answer. There are no coding pyrotechnics here at all. The application consists of one screen with 22 buttons. Hit the button with Dan! written on it, and your iPhone suddenly speaks with the voice of Alan Partridge and says “Dan!”. There are another twenty one catchphrases including “back of the net” and “kiss my face” recorded as audio clips and the screen simply lets you play them, for as long as your battery holds out.

As the age restriction warning suggests, it contains “Infrequent Mild Profanity” and “Crude Humour”, though of course, how frequent the profanity is depends on how much you use it.

Released on 3rd June 09, it’s perhaps not surprising that Pocket Alan is benefiting from a novelty surge, which may wear off.

But that’s not to knock it, Pocket does one simple thing well. As one clear-sighted man on the reviews page says: “Whether you like this app really depends on whether you like Alan Partridge.” Thanks, Charlie Lord, abso-bloody-exactly. (I’ll stop that.)

I think this app would be good for slow conversations in a pub. Instead of having to think of your own little witty catch-phrases you can cunningly and hilariously use some from a famous TV character without going to the hassle of opening your mouth. For example, if you have a friend called Dan you can play his name lots of times over. That would definitely be funny.

Sold by Timothy Hugall from Comfortable Orbit, there was clearly an Alan Partridge fanboy behind this app.

Feeding off a popular phenomenon seems like a good way for app-makers to get attention, even if the finished app has no practical use. Seemingly people will shell out for LOLz and this offers 22 nicely pre-packaged ones.

I won’t say I’ve fallen for it, but if they did one from the Simpsons… well. I’d probably pay 59p for that too.