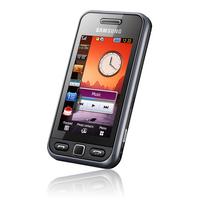 Last year I raved about the Samsung Tocco, a beauty of a touch screen phone that was so simple to use and had a fabulous widgetized interface. Next came the Tocco Ultra, a phone that featured higher specs than the original Tocco (an 8 megapixel camera and AMOLED screen) and a slide out keyboard for extra ease of use. Well they’ve just had a new delivery to this family, the sweetly named Tocco Lite.

This phone can be considered the baby of the family, as it harks back to the design of the original but with pared down features. The five megapixel camera of the Tocco is no more; in its place we have 3.2 megapixels but with added smile and face detection features.

The Samsung Tocco Lite is available on contract online from dialaphone.co.uk

The phone incorporates a 3 inch touchscreen and an FM radio, as well as an internal memory of 50 MB, which can take up to 8GB with a MicroSD card.

It clocks in at 106 x 53.5 x 11.9 mm , and comes pre-installed with a variety of multimedia widgets. As well as the slick touchscreen side bar we found on the other Tocco’s, the Lite not only includes the usual clock, alarm and reminder shenanigans but has a veriety of extra.

It has Facebook and MySpace widgets pre-installed for one click access to your favourite networking sites- so you can update your status with ease. I’m a big fan of their TouchWiz interface and like how they’ve kept the accelerometer and handwriting recognition feature in this budget model.

It will be available in May from Samsung for a yet undisclosed price. Considering they’ve trimmed down the phone, you can expect it to be affordable, but whether it will be available as a low cost contract or on PAYG has yet to be confirmed.