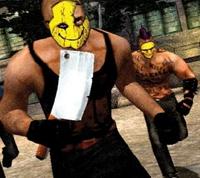 There’s no denying violent video games influence us. They make murder seem more acceptable, educate kids on the variety of weapons available and imply that murder and mayhem are natural parts of life.

When you put it like that it sounds outrageous that they’re available, and not highly restricted items- but then you realize the same could also be said of films (glamorize drugs and guns), music (ditto) and even the news seems to enjoy using as many adjectives as they can to relate to death (alright, maybe just the Mail).

So considering the many, many sources of glamorized violence, should we really start placing video games on the same level as drugs and alcohol in terms of threat to our children? MP Nick Gibbs thinks so- he want teachers to consider them equal to lethal weapons when found in a school.

Stop and search policies in schools always a cause a thorny debate, as though we understand the need to protect our kids, the idea of infringing on their personal space in such a manner makes one feel rather queasy.

Quite apart form the issue of whether teachers should be searching kids at all, comes the issue of just what they should confiscate. Whilst cigarettes and knives automatically fall into that category, should you really pull someone up for owning Manhunt 2?

If this Conservative MP has his way that will be the case. This is what he said at a recent debate;

‘”Items other than pornography could be harmful to children in schools, such as violent video games. Extreme violent video or computer games could well have been banned by the school and they could clearly cause harm, especially to young children. Teachers should be able to search for such things if children are suspected of having them in their possession.”

I’m not very comfortable with that idea. Sure, if the kid in question is playing a game in class you can confiscate it, but why should it matter if it’s GTA on the DS or Mario? And if it’s in their break time, surely confiscating it is an infringement of their personal rights.

If the school has an anti games policy that’s one thing but to include any game in the remit seems unfair. You could argue that some games are rated, and if a thirteen year old is using an 18+ game on their handheld console it’s undeniably inappropriate, but then do you monitor their viewing of similarly rated TV shows?

It’s a weird topic, and opens a whole can of worms for the Conservative party, so I expect Gibbs to be regretting his comments right now.