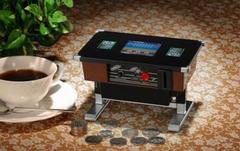 Are piggy banks just for the kids or is it acceptable for them to enter adult territory too? I’ve been under the impression that anyone over the age of ten just wouldn’t want to own a piggy bank (we use real piggy banks when we grow up – i.e. banks) but the Space Invaders Piggy Bank suggests otherwise. For a start, there are not many kids under the age of ten who’d know what Space Invaders is (unless they have seriously cool and seriously retro parents who have bedecked their bedroom with Space Invaders adornment) and I would imagine only the people who have held a place in their heart for the simplistic alien shooting game, would want a piece of this.

Not only will it hoard all your pennies, so one day they may reach a spendable amount, but it’s actually a miniature version of the arcade game.

It has an LCD display, so each time a 100 yen coin is dropped in (that’s about 68p) the game will start. For each coin dropped, an alien will join the battle – there’s a max of 80 aliens. And the final cherry on top of the alien shaped cake is that it’ll play the familiar retro sound effects of the original. It certainly brings something new to the piggy bank arena, doesn’t it? And forget what I said at the beginning – I really want one. It costs $59, but rather disappointingly there’s no word on where you can pick up one of these bad boys.

Like this? Read this: Ice invaders: Invading a drink near you