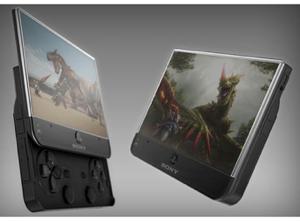 Just what the next generation PSP will look like has been the topic of many debates in the games world. We’re dying to know the full specs of the anticipated PSP2 and want to know when can we expect to get our grubby mitts on it. Well the above image is NOT the finalized version of the PSP2, but an artists rendition of what the new model may look like.

We have to wait till E3 to find out for definite, but today has brought a new round of gossip/leaks to the table. Firstly, the dreaded UMD discs are stated as now being redundant, which makes me cheer inwardly as they were frustrating, inconvenient, and very expensive to purchase. What they’ll be replaced by hasn’t been confirmed, but I’m hoping for USB sticks loaded with games, or perhaps a huge internal storage capacity which will stores games that are wirelessly downloaded.

I know, I know, speculation is reigning free. Other rumours include the use of a touchscreen (seems plausible) , dual analogue controls, and mobile phone compatibility.

Well, seeing as the PSP is already equipped with Skype calling facilities, this rumour seems plausible, but whether they’ll integrate a whole new phone into the device or just incorporate a stronger VOIP service has yet to be decided.

I think a touchscreen would be a nice addition but seeing as the PSP is already very glossy you might be looking at a serious smudge fest. A pull out QWERTY like keypad has also been suggested, but as nothing has been confirmed we’re just going to have to sit tight and wait till June.