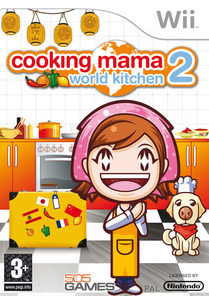 Mama’s back in this second helping of Nintendo’s kitchen-themed wagglefest, offering 51 new recipes from around the world with a side order of new 3D graphics. The game concept is simplicity itself – learn recipes with Mama, earning medals and unlocking new dishes, and then use your skills to impress a collection of in-game friends.

Some gestures require particular timing, which the screen doesn’t always clearly indicate, so early on the game requires a fair bit of guesswork.

Timed levels allow little room for error even in the training stages, and rather than give players a chance to start again, the game will move you on to the next step. One messy stage won’t force a restart, but Mama’s bailouts also meant we couldn’t practice problem steps until the whole recipe was complete. If your cooking attempts go badly wrong , Mama will jump in and save the day in one of the new minigames – flying burgers and mis-shaken salt can be rescued with a timely wiggle of the Wiimote.

The updated animé-style graphics are attractive, and the music and voices contribute to the cute, fun atmosphere of the game. Most of the cooking actions are carried out with the obvious gestures, and the controls are generally responsive – slicing and mixing feel very much like slicing and mixing.

The real drawback is that there’s nothing more to do in the game than master the cooking actions, stir up a feast and receive a score. On the other hand, if you like a game that tells you exactly what to do and then scores you on doing it, World Kitchen might be just the game for you.

Although there isn’t a lot of depth or sophistication, Cooking Mama 2: World Kitchen has a lot of appeal for younger players and casual gamers. No Michelin star, then, but I’d take Mama over Gordon Ramsey any day.