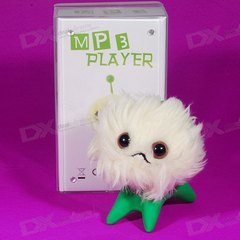 Ok, are we just making gadgets for the sake of it now? My first impressions were, WTF is this? Following an actual reading of its specs as opposed to just trying to hazard a guess, it turns out it’s an MP3 player with built-in speakers! *And* get this… it’s supposed to be a dog! Other than having a fluffy head and four legs (which incidentally look more like a stand than actual legs) there is no indication that this thing is emulating a dog. In fact it doesn’t look like anything… other than a fluffy head on a stand!

But other than being a mismatched dog, it’s a fully functioning MP3 player, with 1GB of flash memory, a built-in loudspeaker and a USB port for transferring songs or using it as a standalone unit via your PC. If you’re into the audibly tacky, click here and get your very own thingamajig for $18 USD.

One thought on “CJ7 – The ever so randomly shaped MP3 player”