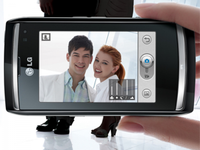 The Shiny offices are big fans of LG’s Viewty phone, with our video demo of it reaching over a million views on our YouTube channel. We’ve been almost sick with excitement at the news of a second updated version, but have just discovered that the name is no longer going to remain the same.

Say goodbye to the potentially amazing Viewty 2 and hello to the brand new Viewty Smart.

Taking inspiration from the recent released Arena, the phone boast an 8 megapixel camera as well as a brand new ‘S class’ touchscreen interface, which I’m guessing will be a lot more sensitive and intuitive. The camera features a Xenon flash and face recognition software as well as manual settings for the more advanced photographer.

You get a shiny 3 inch QVGA screen as well as the usual bells and whistles- I’m talking Wi-Fi, HSDPA and GPS which allows you to Geotag snaps. It’s a slinky 12.4mm thick and weighs in at a ladylike 90g. Storage wise it will hold up to a whopping 32GB.

The phone will also work nicely as a multimedia player as its capable of playing the majority of video files, including DivX and WMV.

Available in June from LG for an undisclosed price, but we reckon it will probably be free on (a potentially Orange) contract.

LG [via Know Your Mobile]