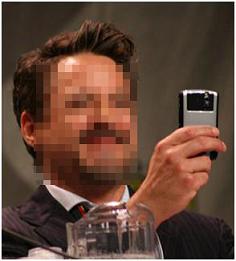 You can’t see the gurn just yet, but trust me, this guy is gurning at his Blackberry hard. But who is he? Well, he’s an actor – I’ll give you that much – and a bloody great one at that, but what else? He was nominated for an Oscar this year for his portrayal of a black man in a hilariously funny film, he’s associated with Charlie Chaplin and is notoriously known for drug related deviance, time in prison and eventually overcoming his mahoosive drug addiction. My final clue (that’ll probably give it all away) is that he was cast as the title character of a well known comic book adaptation.

See after the jump to put an end to your intrigue… 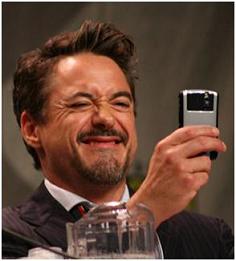 This was a tough one, wasn’t it? Did you get it? It’s Robert Downey Junior – yay. I first saw him in Weird Science – one of the best movies of my youth – and I’ve loved him ever since. I wonder what’s making his face look this way though? It’s kind of a smug gurn he’s got going on, which leads me to believe he’s probably looking at the latest cash injection into his online bank account.