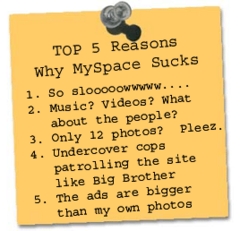 MySpace’s plummet to the bottom of the social networks list was almost inevitable wasn’t it? I mean, it sure has been trailing behind in visitor numbers for quite some time now, not to mention that Facebook overtook it in the popularity stakes AGES ago. And now that microblogging phenomenon Twitter has been thrown into the social networking mix and Bebo has seen in a growth in users, MySpace has been pushed even further to the back of the class. Since its launch five years ago, MySpace has seen some good times, some great times and even some punch the air high five fantastic times, but is now suffering severely in the popularity department and is losing key staff in these tough economic times. There’s even speculation an exodus is to follow.

It must be a sad time for MySpace staff and founders. The site that was once synonymous with the term social network has ultimately been left out in the cold and is now half the size of its rival. Users who would once take a bullet for their favourite social network, have now migrated to the more popular sites – that includes a lot of the musical folk too (who said the internet was a fickle place?). Just to give you an example of how bad things really are, MySpace had 124 million monthly uniques last month; Facebook in contrast received 276 million unique visitors, giving it a traffic increase of %16.6. To put it further into perspective, the sites were about neck and neck around June last year. I’m sure I don’t need to tell you, MySpace has taken a serious blow.

Unlike the aforementioned popular social networks, that much like a tumour are growing bigger each day, MySpace seems to have had an adverse effect. When it was first introduced in 2003, the site was the leader in the web 2.0 revolution, allowing users to generate their own content and share content with friends. Then Facebook came along, which wasn’t exactly an instant hit but gradually got there, taking some of MySpace’s users and popularity with it. The obvious shift in popularity came with the gradual change in social network coverage, switching from referencing MySpace to citing Facebook – a trait that has continued to this very day (although Twitter is slowly worming its way in)

So where did it all go wrong for MySpace? Well, for a start its design isn’t exactly what you’d call well groomed and presentable. This is mainly down to its bespoke nature that allows users to pimp their pages in any style they choose – although this 90 percent of the time results in an overuse of images, graphics, clashing colours… basically visual diarrhoea (when will people realise creative freedom doesn’t = cram as much as you can onto your page). MySpace also lacks the fun factor that comes hand in hand with Facebook, such as status updates (or rather telling Facebook what’s on your mind), super wall, quizzes and fun apps etc.

Another nail in the coffin is the fact that MySpace focuses heavily on the music, which is great for the musically talented folk but not so great for the average user. Without the music as a focal point, MySpace pages are actually quite boring.

With the onslaught of social networks dominating the intertubes, MySpace somehow got lost amidst it all. However, Nick Thomas, an analyst at Forrester Research is determined not to accept MySpace’s failure just yet. Commenting on the recent observations, he said: “In the last 12 months Facebook has extended its dominance in every territory in Europe.” However, he added: “I’m not convinced that it’s terminal for MySpace. The battle isn’t over yet.”

If there is anything to take away from this tale of woe, it’s that the internet is an incredibly fickle place. What is today’s wonder site is tomorrow’s spam. Either that or it’s just a case of out with the old, in with the new?

Lucy is the editorial assistant for Shiny Shiny and foresaw MySpace’s inevitable fail which is why her MySpace account is inactive and she pledges allegiance to Facebook and Twitter.