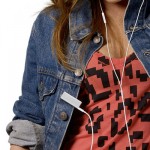 If you thought the iPod Shuffle was about as miniscule as a quality MP3 player could get, feast your eyes on its successor and overall crown wearer of the teensiest MP3 player to have ever graced the planet. At nearly half the size of the preceding Shuffle, the latest iteration of Apple’s most budget iPod option sure has the potential to be at the root of many a panic attack and frenzied handbag search. I say either prepare to lose it (you may want to get insured) or accept that you may become incredibly anal about keeping it your sights at all times. Just look at the picture – it’s the same size as a key… a key!

Diminutive size aside, it is the first music player to actually talk to you. Just don’t expect it to respond if you ask how it’s feeling (it’s not that kind of player). Instead, expect it to voice your song titles, artists, playlist names as well as how much battery life you’ve got left before it needs a power boost.

And very akin to the act of writing ‘SEX’ on the wall of the school toilets, I’d be seriously tempted to let my childish side take over by putting expletively named songs in my playlist just to make it say rude words (hehehe). Tenacious D’s FHG springs to mind.

Its new aluminium design guarantees sturdiness, it also promises a ten hour battery life, and its 4GB capacity means it can hold up to 1,000 songs. It’s shipping to the UK now, now, NOW and comes in either silver of black hued outer shells for £59.