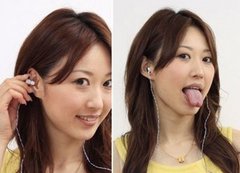 The future of gadgets is here and it involves being in command of your gadgetry with your facial movements. This includes smiling, winking, sticking your finger in your ear, poking your tongue out, maybe even picking your nose? So the guy sitting opposite you may think you’re making a move by playfully poking out your tongue, but in actual fact you’re just changing tracks on the new Prodigy album and couldn’t care less about what he thinks. Well actually, by the time the technology makes a public appearance (which is being tipped at two to three years) it’ll be the old Prodigy album – but that’ll all be irrelevant when you’re flaunting your new movement based tech to your green-eyed pals.

What may look like a pair of music emitting ear buds are in actual fact magical devices a pair of infrared sensors with the power to measure the movements inside your ears, generated by different facial movements. The inventor of the Mimi Switch has very high, if not far-fetched objectives for his creation. And if he pulls it off, it’ll be just like performing your very own magic tricks.

He says: “You will be able to turn on room lights or swing your washing machine into action with a quick twitch of your mouth. An iPod can start or stop music when the wearer sticks his tongue out, like in the famous Einstein picture. If he opens his eyes wide, the machine skips to the next tune. A wink with the right eye makes it go back.”

Moody music listeners are in for a cheering up treat too. Apparently, the Mimi Switch might also be able to monitor your mood. So someone who “isn’t smiling enough” could be compelled to listen to enthusiastically happy tracks until they turn that frown upside down. You could trick it though, and fill your music with ominous grunge – that’d teach it.

Technology so futuristic just has to have come from Japan. Oh, it does. I thought so. I’m just a little concerned. What if you get an itch and have to scratch your nose? Is the washing machine going to go awol, or are the lights in the house going to start blinking on and off? It’ll be available in Japan in two to three years time, which means by the time it reaches our shores we should be able to find out answer to that question in about a decade, maybe even two.