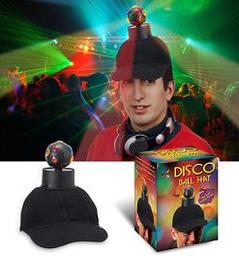 This is right up there with those propeller hats worn by Screetch in Save By The Bell and many a nerdlinger, isn’t it? If this guy was in the hallway of an American high school as opposed to a discotheque, he would incontrovertibly be getting the shi* kicked out of him now, or maybe even painfully experiencing a wedgie… or a swirly (where a persons head is put down the toilet and then flushed). Put it this way, the cool kids would like totally never be caught dead wearing one of these.

But not everyone’s concerned with personal appearances and the opinions of the general public. These are usually the same bunch of people who wouldn’t feel out of place wearing the aforementioned propeller hat or something akin to Borat’s mankini. This would be the same group of people who wouldn’t even consider the social repercussions of a bit of head gear such as the Disco Ball Hat. It’ll certainly draw attention to yourself – it puts on a rotating lights show (good god)!

As the product description says, ‘bring the party with you wherever you go’. But we’d much prefer you didn’t.