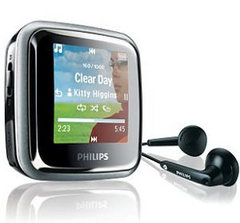 It may be small but Philips’ GoGear Spark sure packs a lot into its compact frame. Philips even describes it as “compact in size but big on style and sound quality”. Sure, it’s not as pretty as the members of the iPod family, but it puts up a good fight. On its pretty 1.46-inch OLED colour screen you’ll be able to view album art and display pictures, it also comes with the ability to make voice recordings and play and record radio (depending on what model you get). As well as that, Philips has loaded its mini MP3 player with its proprietary FullSound audio refinement system, which aims to improve the quality of low-bitrate/ songs and prevent them from venturing down the tinny path.

Because of its size Philips has decided to forgo any visible buttons and instead utilises the sides of the screen to double up as buttons. So pressing the left and right side of the screen controls menu navigation and the top and bottom skips tracks.

According to iGizmo, the Spark feels a bit on the cheap side but generally proved to be a competent performer. There’s a range of models to choose from in 2, 4 or 8GB offerings with prices starting from £39.99 going all the way up to £59.99. And if you want the added luxury of FM radio (if you call that a luxury) you’ll need to spend an extra £5. All models will be available for purchase this month, except the 8GB model which launches in May.