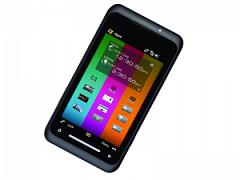 Toshiba’s foray into the world of the touchscreen phone begins its tale with the TG01 – a super slim phone that’d give lady Beckham a run for her money in the super skinny stakes, and with a touchscreen big enough to rival the illustrious Apple phone. With Mobile World Congress just around the corner, it’s shaping up to be a vicious battle of the phones, with manufacturers trying to out-do each other in the impressive department. And Toshiba is geared up with what it says will “revolutionise the mobile entertainment world”.

Its specs are enough to make you rub your hands together like some kind of evil genius, and at just 9.9mm thick, it sounds like its outer shell won’t make a noticeable dent in your pocket either. That aforementioned sizeable touchscreen is a 4.1-inch VGA display, which apparently utilises “all the technology from our TVs”. There’s also virtual trackpad, a G-sensor (as opposed to an accelerometer) allowing you to tilt the phone around a central point, and a super-sonic Qualcomm Snapdragon 1GHz chip, that Toshiba says will make it considerably faster than any phone on the market.

More specs after the jump…

The TG01 treats you to a Windows Mobile 6.1 OS, HSDPA, 3G, AGPS and GPS connectivity, Div X support and a microSD slot to expand its paltry in-built memory of 512MB. It also packs full flash support for plenty of online flash video action.

This is a phone for the people. According to Toshiba, it “has listened” to what consumers want, so presuming they’ve taken everything into account, this should be the ultimate super phone, minus all the flaws of current handsets that make us furiously bang our keyboards with ferocity.