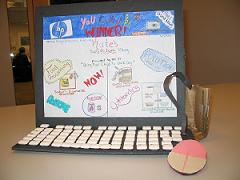 Despite having serious suspicions about the likelihood of a $20 USD laptop, Engadget reports the Indian government’s cheap as chips laptop is due for an unveiling in six months time for a price that sounds likely to send the company responsible into bankruptcy. Although nothing is officially, well errr, official, the laptop will feature 2GB of memory, WiFi, fixed Ethernet, and will consume just two watts of power. No word on RAM, processor or screen size though.

It’s been dubbed the ‘Sakshat’, which translates as ‘before your eyes’, which ironically, isn’t the case as there are no official pics to accompany the information, raising those suspicions further. But I guess we shall see come 6 moths time.