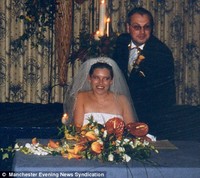 We’ve all seen it, some have possibly experienced it and some just do it to raise a few eyebrows and generate a reaction. Yep, I’m talking about the execrable and humiliating act that is changing your relationship status, unbeknown to your other half. Just ask Emma Brady, the unfortunate wife who found out her marriage had ended by a change in her husband’s relationship status – “Neil Brady has ended his marriage to Emma Brady” – nice!

Ahhh how times have changed since that blissful photo was taken. To be fair, the Brady’s six year marriage had hit a bit of turmoil. That became apparent when her green-eyed hubby threw her out of the house and injured her wrist for allegedly having relations with another man! He’s now facing the consequences of that in court as I type.

Still, at least she didn’t kill him like this ker-azy person.