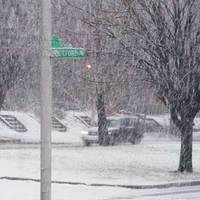 OK, we’ve now discovered the world DOESN’T end when it snows. Yes, a day at home was a wonderful experience, but I’d say the majority of the workforce is back at their computer screens now. The snow however, looks like it may be here to stay for while, and now the initial shock has been overcome, you’ll want to work out how to capture this winter wonderland.

Taking pictures of snow differs from your usual snapping of friends in drunken poses as the whiteness is so bright, the auto setting can leave you looking rather washed out.

Here’s my guide on how to take the best snow pics ever!

1.Turn on your flash.

Yes, really. This seems like a very stupid step, but is actually one of the simplest ways of getting a good snow picture. You might think the image is light enough, but the flash actually balances out the image, making the colours look correctly saturated, instead of dark and grey.

Preset the white balance in advance by focusing on a patch of snow to make sure you have the colour matched correctly. By doing this you let the camera balance the other colours in shot with the white balance as the base line- which means your photo won’t look grey, but crisp and clear.

Snow distorts images because the colour can be so bright that the rest of the picture appears dark in contrast, or has a bluish tone.The white balance setting should be under the options mode on your camera- fiddle around and you should find it quite easily- probably best done on your doorstep, before your fingers get to cold! If you have a snow mode on your scene options it will hopefully do this automatically, but it’s useful to know how to do it.

Flowers look great in macro mode. Flower covered in snow? Even better. Plus cute animals frolicking outside are always a winner as are close ups of kids playing, or snowmen tottering in the breeze.

Yes, I realize everything looks *lovely* when covered with a layer of the white stuff, but how many images of houses covered in snow do you really want? Try and combine a beautiful image with a focus, such as a snowy house against a sunset, or capture objects covered in snow rather than just snowy landscapes.

Normally people veer on underexposing scenes, but in the case of snow it’s best to take the opposite approach. When a camera reads a snow scene the meter will generally try to render it grey, and as you’re looking for lovely white pics rather than grey dull ones you want to counter that. If you alter the exposure setting the camera will take in more light and create the ‘brushed by Christmas’ effect you were going for.

Be careful when you have a subject in an overexposed shot though, as if they’re too far way they’ll look overexposed as well- so either keep them close to you when in shot, or use overexposing for landscape shots only.

Related: How to take firework pictures on Bonfire Night