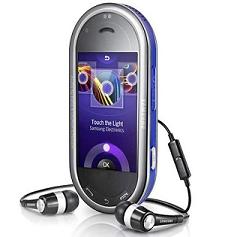 Look, it’s a mini touchscreen jukebox, or rather, it’s Samsung’s beauty of a handset – the M7600 ‘Beat DJ’. As it’s a touchscreen handset paying homage to those masters of scratch, it features a turntable-esque user interface, which you will have to spin for navigation. Let’s just hope it doesn’t take the same vigorous spinning technique used by DJs just to get to your new messages – that would soon get very tiresome. So, clearly, it’s a novelty effect, but what a great novelty attribute to have.

It’s a Quadband GSM/HSDPA enabled handset, with a 2.8-inch AMOLED touchscreen, GPS, and a 3 megapixel camera. As it’s a rather plush piece of mobile equipment, it’s no surprise Bang and Olufsen are involved too. But those luxury purveyors have nothing to do with the design. Instead, it’s responsible for its amplifier, so expect nothing but audio excellence.

As a phone with the acronym ‘DJ’ in its name, it’s only right it gives you the chance to hone those musical skills by featuring the necessary software that’ll enable you to both create and own your own music, as well as remix other songs by adding those annoying effects and filters.

Other important elements include a microSDHC card slot for up to 16GB of memory, Stereo Bluetooth, FM radio and a headphone friendly 3.5mm jack.

There’s no word on price or availability details, but if we keep our fingers crossed en masse, maybe it will make it to our neck of the woods.

Like this? Take a look at this: Spinning the decks on DJ Hero will be a reality soon