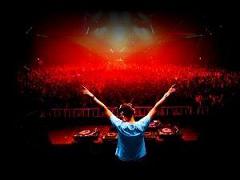 It was hardly a secret, and if it was supposed to be, DJ Hero has to be one of the worst kept gaming secrets ever. So, speculation surrounding DJ Hero started a little while back. Then MTV News went and confirmed it all, ensuring that our high fives and air punches weren’t all for nothing. However, as we’d heard nothing from the horse’s tight lipped mouth, it was best to take this snippet of news with a pinch of salt.

Guitar/rock god simulator games have been occupying the top spot of the gaming world for a while now. That could all be about to change, as we now have that confirmation from the horses mouth, meaning Guitar Hero and its rocking rival may finally have to step down from that pedestal and let something else enjoy the spotlight for a while. However, as it all emerges, it seems perhaps we weren’t yet supposed to be given the turntable related news. Thanks to a blunder by Activision Blizzard boss, Robert Kotick, who blurted out proof of its existence, we’ve been treated to some insider knowledge that the game is a turntable you can actually play, spin discs and mix songs for plenty of competitive game play, DJ wannabe action.

Everyone thinks they can be a DJ, and if Lady Gaga’s recent stint at Punk is anything to go by – anyone really can DJ. There’s no official release date, but ‘later this year’ and news that it is actually coming should suffice for now.

[via Computer and Video Games]